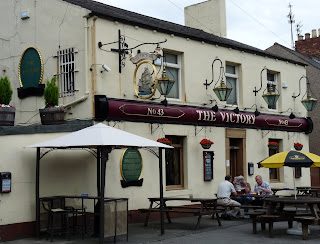 The Victory, in So. Gosforth, used to be an occasional lunch time stop off point, about ten or more years ago, if I happened to be working in the Gosforth area and a good pint was required.
Parking was always a bit of a problem but has been improved considerably I'm pleased to say.

The ale selection was always superb and with Workie Ticket, Landlord, Directors, Pedigree and Deuchars IPA on offer, that hasn't changed, but I only had time for one. What a pity the Workie Ticket I chose was a bit on the cloudy side. There's no excuse for that in a place like The Victory which was always top notch. A shame I didn't have the time to sort it out and left disappointed. I hope I was just unlucky as The Victory used to have such a good name for ale.
Posted by Jack at 18:50