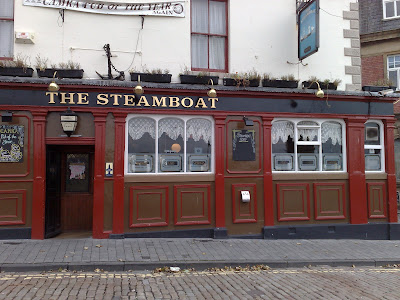 The Steamboat was sampled by Cask Task some time ago, but as a beer festival was about to take place there the following week, it was decided to put the official visit off until then. What happened? We missed the bloody thing!

We happened to be passing that way today so the transport automatically turned in to Mill Dam. Cask Task was beaten to it by a funeral party -yes, a funeral party!

Not to be put off. Cask Task personel are made of sterner stuff, when 1st rate real ale is available, on we went. It has to be said at this point, that the selection of beers available was terrific and the boss man helpful and entertaining.

Eight pumps on deck, including Adnams Broadside, Moorhouse Black Cat, Theakstons Old Peculiar, Wells Bombardier, Deuchars IPA, Wychwood Hobgoblin, Abbot Ale and our piss artist off the telly, Morrisey and his pal Fox, had their Aussie IPA in there!

Not having tried it before, Morrisey and Fox's Aussie IPA was the first port of call in the Steamboat. What a beaut. Strong, but a really fruity and delicious pint. The Black Cat was totally different but a good dark drink. Such a good selection a few more could have went down no bother.

The pub itself is a proper boozer with the right atmosphere and a friendly bunch of real ale regulars.