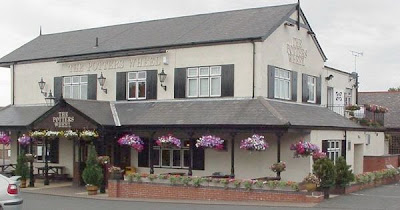 The Potters Wheel. As an experienced old sot starting in the sixties, I first rolled into this place in 1963 when it was a night club known as The Blue Parrot.
My employer at the time had won the local football league and chose to hire the Blue Parrot as our reward. I got a lift from a tee-totaller friend and felt at liberty to hit every boozer from Gateshead to Sunniside with my chosen tipple of the time Newcastle Broon Ale. As our strict night club would only serve half bottles I rounded the evening of with (so my t-t pal told me) a total of eleven and a half broons. He then left me as there was a couple or more buses hired to take the drunken footballers home.I got on the wrong bus of course and never got home that night!! I have never been back since.
The place is now called The Potters Wheel and a very pleasant pub its turned out to be. Although its passed through many hands and was in fact under new ownership when I called, it still had a pleasant feel to it. The beers on offer were Black Sheep, Marstons Pedigree, and Mordues Workie Ticket, the last mentioned of which I partook of a couple. Very nice!
The Potters Wheel also has a decent looking menu of grub.
Posted by Jack at 07:59