The Grey Horse looks like, and probably was, an old 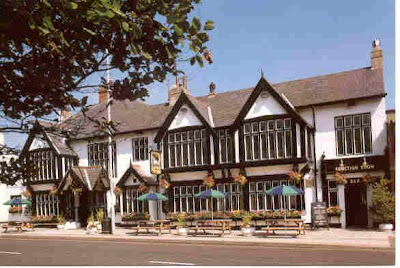 country coaching inn.
The interior does its best to keep the look going with its oak beams, oak furnishings, huge fire places, false brickwork pillars and general olde world appearance. This gives it all a most welcoming and comfortable feel.

Originally two entirely separate rooms, each with its own separate entrance, The Grey Horse has become one enormous pub with the bar at its centre, but managing to retain its country atmosphere.

With Deuchers IPA, Wells Bombardier and Jennings Cumberland Ale available, I had no problem in settling down for a while. So much so, I had sausage and mash to eat as well.
Its a pity its so close to the busy road to Sunderland at the front, but there is a large car park to the rear.
Over all, a most enjoyable visit.
Posted by Jack at 11:01