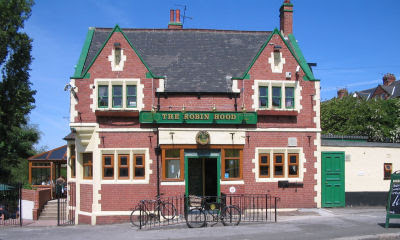 The Robin Hood is probably just as well known locally for its association with The Jarrow Brewing Company since 2002. The pub itself though has been around for donkeys years but has been extended to include a restaurant and beer garden.
Brewing ceased at The Robin Hood in 2008 with better facilities now at South Shields but the pub is still going strong.
The beer selection, as you would expect, is excellent. Mainly of course from the Jarrow Brewery. Jarrow Bitter(3.8%), Rivet Catcher(4.0%), Joblings Swinging Gibbet(4.1%), Caulker(4.2%) and Weston's organic cider to blow your head off at 7.3% !!
I spent a very pleasant afternoon with the Jarrow Bitter by the stream, at the side of The Robin Hood, listening to my son's tales of ancient American cars from 1930 to 1960 (God some even older than me!!).
Contrary to rumour, 'Old Cornelius' Whalen, a Jarrow marcher and his pal, did not get punctures and leave their bikes outside on the march South. (see picture above)
Posted by Jack at 02:16