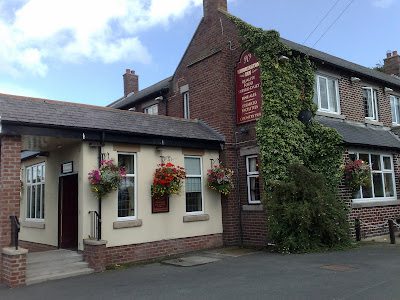 The Widdrington Inn sits right on the side of the A1068 coastal route at the very edge of the tiny village of Widdrington.
When I first went in to this place some fifteen years ago it was a bit of a dump but in the last ten years or so its been transformed into a worthwhile drinking and eating establishment.
Going strongly for food unfortunately has resulted in just a couple of hand pulls on offer.Never mind though. Any port in a storm, Cask Task ventured in.
The real ales were Abbott Ale and Hogshead Bitter (a pint of Hogshead was supped). It was an early August midweek lunchtime visit and the pub was very busy. An ok pint was all we had.
Not a bad pub though.
Posted by Jack at 09:58