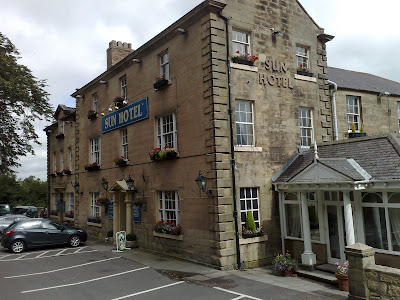 The Sun Inn.
Having had a little run up the loverly coastal route, I was caught in the most horrendous of downpours, so I decided to stop and wait for it to clear. My daughter had stayed for a couple of nights some years ago and recommended the Sun Inn at Warkworth, so I pulled in. I'm so pleased I did.
What a comfortable and cosy bar. Coopers Bar its called and it served a delicious pint of Courage Directors. Northumberland Brewerys Fog On The Tyne and a pint of Theakstons were also on tap. The rain came down for 2 hours and had to force down another Directors. The things I've got to do for Cask Task!

The lounge, conservatory and restaurant were most tempting, but the downpour stopped and I had to make for home. What a pity. I really felt like making a night of it.
This old coaching inn with its views of the Coquet river to the rear and the Castle at the front is worth a stop.
Posted by Jack at 09:00