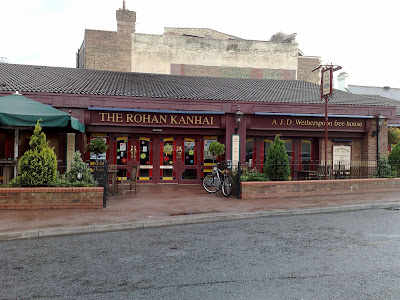 The Rohan Kanhai. Named after the popular and famous international West Indian cricketer. A superb batsman, who played for Ashington for a short time. This is yet another busy Wetherspoons eating and drinking establishment.
Although I lived for 10 years just a few miles up the road from here, I'd never been in. It was typical Wetherspoons. Characterless, but cheap and cheerful. Ten real ale pumps, all in working order,and all at ridiculously low prices, eg. Courage Directors, which I had, at £1.79 a pint and a reasonable menu of food to boot.
Atmosphere a bit like a works canteen mind you, but it is good to see a pub buzzing.
Posted by Jack at 16:23