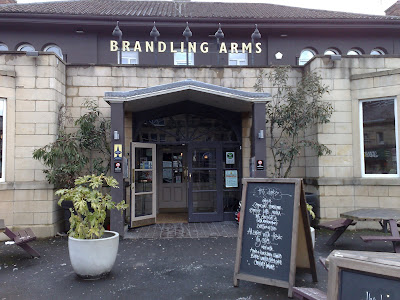 The Brandling Arms, apparently named after a famous wealthy family. The Brandlings must have been a right bunch of boozers as there appears to be a few Brandling pubs in the Gosforth area.
This large pub is attractive at the front, inside and even at the rear, where a pleasant open beer garden lies. Cask Task is starting to sound like a travelogue!
Some of the funiture inside was low slung and so comfortable I had to be lifted out of it so that we could have a steak sandwich. However, the food was very enjoyable.

The Brandling Arms majors on food but does have a reasonable choice in real ale. Although I enjoyed a half of the Adnams Wheat Beer, the Deuchars IPA was more to my liking. Others on hand were Youngs Bitter and Roosters Huntsman Ale.

A pleasant afternoon.
Posted by Jack at 05:06