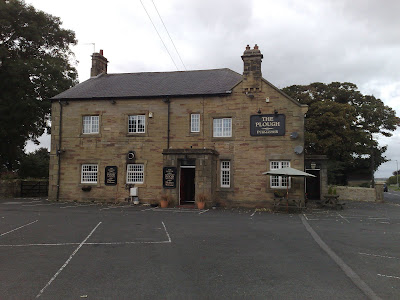 The Plough at Ellington.
At last a return visit to my local, as it was for ten years, and I'm pleased to say it hasn't changed a bit. Still got Abbot Ale, powerful stuff, and Black Sheep (or 'sheep dip', as my pal up there used to call it).
I started on the Abbot some twelve years ago. Having watched the 'Toon' play when they were Keegan's team, I could rarely remember stumbling home in the village at closing time. Happy, happy days.
I did move on to the Black Sheep eventually and became a slightly more sober client of the Plough as a result. But I must admit to being a Plough fan still, with a glorious coastline just a mile or so down the road at the little village of Cresswell.
A visit here is highly recommended and its worth mentioning that its a great jump off point for visits to the most glorious coast, all the way up to Seahouses, Bamburgh and of course Lindisfarne.

I watched from my home as the 'Big E', the north-east's last deep pit, was closed down and demolished.
Posted by Jack at 12:26