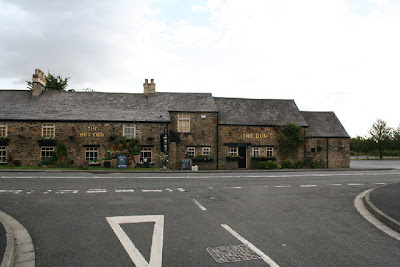 A fine pub/restaurant, a bit isolated on the A1052, but in beautiful countryside.

Once inside the feeling of warmth and comfort was smashing (except for the bloke lying prone on the floor in the bar area; but more of him and the ambulance personel in a moment).
There were two good real ales to be had. Adnam's Broadside(lovely) and Old Bear Brewery's Bruin, which were juggled regularly with others.

Now for the afternoon's entertainment.
This bloke apparently stumbled in the bar. Not unusual you might think(I know I often do so myself), but this poor sod has a metal insert in one of his legs which collapses. No, I'm not making this up and it's not the intro for a joke!

So the ambulance arrives to find him lying on the floor and in excruciating pain. They can't move him without a pain killing injection. Now comes the tricky bit. The bloke's petrified, and I mean really petrified, of needles!
After a half hour of failed persuasion, the ambulanceman is silently wishing he'd kept his job at the Co-op delivering pies. But without warning, the National Health training and a bit of individual wit and skill comes in.
'What's that over there?' says our intrepid NHS man.
'What ?' says our quaking patient, turning his head to see.
Then .GID IP!! The needle's in and 20minutes later the patient's on a stretcher and off to hospital. Genius, pure genius!

A pleasant afternoon. A tasty pint. Comfortable surroundings. Cracking (Ooh, that was uncalled for Jack!) entertainment.