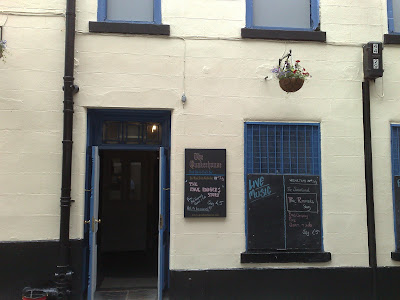 The Quaker House exterior doesn't exactly invite you in. Look at our photo. And its up a narrow alley! Nevertheless, in we went and I must say the greetings from the guv'nor and the barman were 1st class. So was the beer. Eight on tap! The place was a real drinkers paradise.
Rock music a speciality with umpteen bands billed to appear.
The Quaker House was CAMRA's Town Pub of the Year 2009-2010.

A highly enjoyable visit to a good real ale house.
Posted by Jack at 16:30