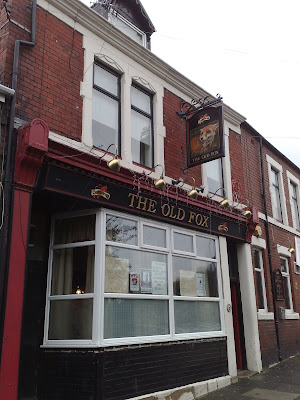 The Old Fox in Felling, where I was born, not in the pub I might point out, seems to have been there forever and probably has been. Between Felling High Street and Carlisle Street there must have been a couple of dozen pubs at one time. There's only three left in Carlisle Street now.

After a days hard slog, on behalf of Cask Task of course, The Old Fox and the other Carlisle Street real ale pub were duly visited and the beer severely tested.

On waking up the next day it was discovered that neither the photos, nor a note of the beers sampled, were to be found missing. Now I wonder how that happened?

Every cloud has a silver lining however, as another trip to Carlisle Street Felling was duly made.
The Old Fox had 5 handles, 3 of which were in use and Fuller's London Pride and Durham Brewery's White Gold again proved to be extremely tasty.
The Old Fox, as you might expect, is a traditional but nonetheless comfortable little pub with good beer.