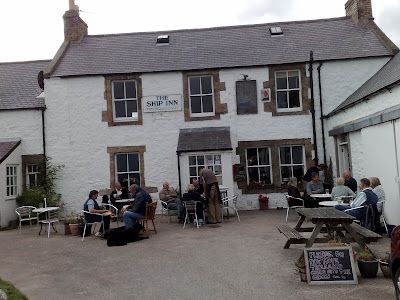 The Ship Inn at Low Newton, Northumberland, is a dream of a little pub at the very water's edge.

I must have driven past the turn off a thousand times and never bothered to investigate. Stupid boy!!
Take the B1339 north through Embleton and watch for the sign post for Newton by the Sea.
Pass through Newton itself and you come to a dead end right at the the water's edge and there it sits. The Ship Inn Low Newton.
You can't get your motor, in so you've got to leave it in the car park, about 150 yards back. But believe me its worth it.

What a beautiful little bay with the Ship Inn at its edge. The silence alone, without the cars to mar the water gently lapping at the bay's edge, is a pleasure. But to cap it all the Ship Inn has its own micro-brewery. Naturally, I sampled it. Smashing.
Sea Wheat and Sand Castles are two of their own beers and Wylam's Northern Kite and High House Farm Brewery's Nels Best were also available.

The place was really busy but with no music bombarding the eardrums the quiet atmosphere was superb. There's fresh lobster and crab on offer but I must admit, I stuck to the delicious beer and sat outside as the weather was superb.

So marvelous it was that I managed to persuade my daughter to take me up again a week later and had some crab stottie and some more of that lovely beer!
Posted by Jack at 04:07