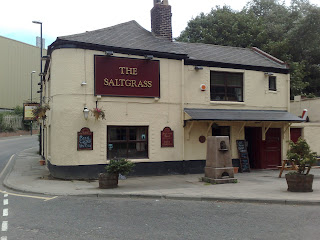 .It was a chilly day and a warm
and welcoming open fire greeted us and a good pint of real ale. My second visit today found the place under new management!
Mark Scott, a Heart of Midlothian man originally,
although now living in Sunderland for some years, has taken it on.
Three wooden handles on show but, disappointedly, only one serving ale! Green King's Abbott Ale it had to be then! It was ok.
Plans for six real ales in total, a sprucing up (not too much I hope) of the interior, and a tidying up of the beer garden are in the pipeline. The previous people were strong on food but Mark is going to concentrate more on the beer. I hope he gets his skates on. One real ale on offer?
Based in Hanover Place, a real ale area with two or three good pubs within easy reach of each other, The Saltgrass is a gem. Loaded with 150 or so years of tradition. Just some choices of beer lacking.
Based behind B&Q and within easy reach of The Stadium of Light, Sunderland's football ground, the pub is a good starting point for the match.
A smashing pub . So come on Mark, get your finger out and get all these pumps working!
LEFT CLICK ON PHOTO TO ENLARGE
Posted by Jack at 04:32