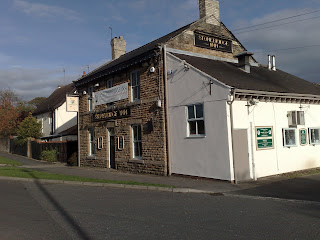 The Stonebridge Inn was visited by Cask Task in the early part of 2010, only to draw a blank as far as real ale was concerned. It's only stocked in the summer season we were told. 3 forlorn hand pulls were temporarely redundant.
Cask Task is made of sterner stuff, and did as asked, to find only one in action on the return visit. Spitfire was the one, so a couple of pints were had. The consolation, however, was the accompaniment of some fine sandwiches to go with the beer. One steak sandwich and two exellent lamb sandwiches were served up and despatched with vigour.
Only one real ale choice was a disappointment but the food did make up for it.
Posted by Jack at 07:21