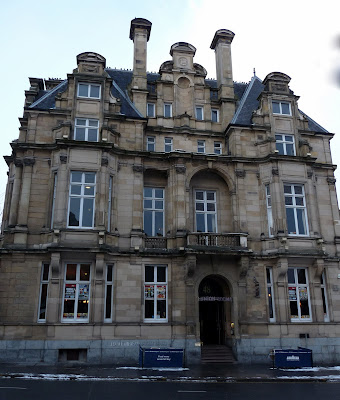 Cask Task was on a mission to bring the pub photos up to date when we stumbled upon two gems in Newcastle. The Union Rooms on Westgate Road was the first. Look at that building!

The last thing we thought was that this had become a Wetherspoon's pub, but it has, and what a beaut! Cask Task has been rather critical of much of Wetherspoon's acquired buildings but The Union Rooms is smashing. Made up obviously, of separate rooms, each with its separate character and use.

As usual the real ale choice was superb and the prices amazingly LOW. A choice of six, comprising of Maxim's Maximus, Marston's Pedigree, Daleside's Winter Jewel, Ruddle's Best, High House Farm's Cyril the Magnificent and my choice, a delicious stout of Black Grouse from Allendale Brewery. It almost matched the building in its majesty!

Go and try it, but watch you don't walk straight by thinking its the library or something!

Access can be a problem at the front, but don't be put off as the entrance at the lefthand side is ok.