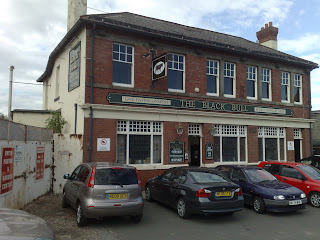 The Black Bull used to have a reputation, some time ago, as a 1st class real ale pub, or so I was led to believe. I don't know what's happened but it now belongs to the Cask Task section of has beens.

We went in, had a cloudy pint of M'Ladys Fancy from the Titanic Brewery, and were completely sunk like the brewery's namesake ship, alas never to be seen again.

M'Ladys Fancy by the Titanic Brewery. Also Deuchers IPA and Black Sheep, were also in the murky depths.
Posted by Jack at 08:14