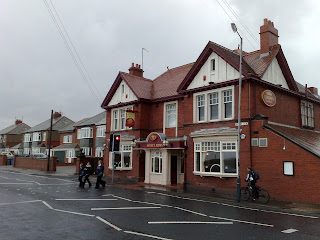 The Astley Arms once, a long time ago, must have been a good pub. Before and during the 2nd World War, it must have had a loyal following.
There was a major naval base just up the coast at Blyth for a dozen submarines. All but 4 of them were lost or destroyed.
A bottle of Johnny Walker Red Label Whisky was left behind the bar by one of the submarine 'Seahorse' crew, to be collected on his return. This submariner, 'Tug' Wilson, was lost at sea along with the rest of the crew of 'Seahorse' in 1940, and the unopened bottle remains in a glass case in the Astley Arms in his, and all the other lost submariner's memory.
The two real ale pumps, Green King IPA and Black Sheep, are all that remain, in a what is virtually now a family canteen, rather than a pub.
Posted by Jack at 07:09