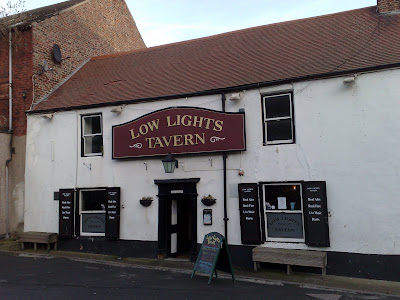 The Low Lights Tavern has the potential to be another North Shields real ale gem.
Reputed to be the oldest pub in North Shields and it certain looks it.

A real old fashioned boozer, split into two separate areas, as they used to be, the Low Lights was the original fisherman's drinking place. Loaded with character and of course its share of ghosts roaming upstairs and in the cellars below, as related to us by Sophie behind the bar.
Having just come under new ownership its ancient origins are trying to be revived. And so they should be. Rather than than trying to turn it into a wine bar (holy mackerel!!) as the last owner apparently tried to do!

Your two intrepid Cask Task hunters almost gave it a miss, because of its recent past, but of course we couldn't resist its ancient facade. We're delighted we couldn't.

Among the 4 real ales on offer were Mordues Workie Ticket, Bass and my choice Wylam Bitter.
An enjoyable and entertaining visit.
Good luck to Sophie and the new owners.
Posted by Jack at 12:41